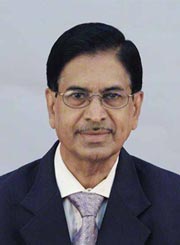 Byrana Nagappa Suresh is an Indian aerospace scientist. He served as the Director of Vikram Sarabhai Space Centre (VSSC), Thiruvananthapuram during the period 2003-2007. He was born on 12 November 1943 in Karnataka, India. Dr Suresh took his degree in Science in 1963 and in Engineering in 1967 from Mysore University. Later he took his Post Graduate degree from IIT Chennai in 1969. He started his career in ISRO at Vikram Sarabhai Space Centre (then Space Science and Technology Centre) in 1969. Later he earned his doctoral degree in Control Systems from Salford University, UK under commonwealth Scholarship. At VSSC he has held various positions like Group Director Control & Guidance Group; Project Director, Inertial Guidance Systems Project; Deputy Director (Avionics) and Associate Director (R&D) VSSC before taking over as Director VSSC in 2003.

He has several awards and honours to his credit. Prominent among them are ‘Dr. Biren Roy Space Science Design Award’ from Aeronautical Society of India in 1993, ‘Agni Award’ for excellence in self reliance from DRDO in 1999, ‘ASI Award’ for contribution to rocket and related technologies from Astronautical Society of India in 2000, ‘Distinguished Alumni Award’ from IIT Chennai in 2004 and ‘Technical Excellence Award’ by Lions International in 2006. In addition the nation honoured him awarding Padma Shri in the year 2002. He has published more than 45 technical papers in national and international symposiums, conferences and journals and guided more than 500 technical reports in the area of launch vehicle design, mission, avionics and other associated areas. He received Padma Bhushan, the third highest civilian award in the Republic of India (2013).