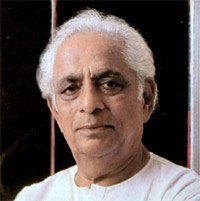 Dashrath Patel was Indian designer, sculptor, who was the founder secretary of the National Institute of Design (NID), Ahmedabad, from 1961 to 1981. He was born in 1927 in Sojitra, Gujarat. Patel studied fine arts at Government College of Fine Arts, Chennai (1949Ã¢??53), where Debi Prasad Roy Choudhury was his mentor; thereafter studied painting, sculpture and ceramics during his Post Graduate studies at Ã??cole des Beaux-Arts, Paris (1953-1955). He practiced in diverse art fields as a painter, ceramist, a graphic designer, industrial design and exhibition design. Early in his career he was contemporary of Tyeb Mehta, M.F. Hussain and V. S. Gaitonde who were together in the 50s in Bhulabhai Desai Institute, Mumbai, and often exhibited alongside them. Later Henri Cartier-Bresson introduced him to photography, after former visited his exhibition at the Galerie Barbizon, Paris. He remained the secretary of the National Institute of Design, Ahmedabad for its first 20 years, from 1961, he also established the ceramics department at the institute. He resigned from NID in 1981 disillusioned, and went on to establish the Rural Design School in Sewapuri, near Varanasi. Ã?Â During his career he collaborated extensively with artists, American designer Charles Eames, artist Harindranath Chattopadhyay, dancer Chandralekha. He died in Ahmedabad after a brief illness, at the age of 83. He was bachelor. He was awarded the Padma Shri by Government of India in 1981, followed by the Padma Bhushan, posthumously in 2011.