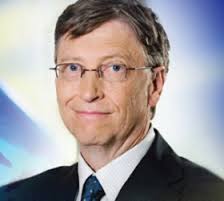 Bill Gates, is an American business magnate, philanthropist, investor, computer programmer, and inventor.Gates originally established his reputation as the co-founder of Microsoft, the world’s largest PC software company, with Paul Allen. Since then he has served as a long term CEO and chairman of the company.

Today he is consistently ranked in the Forbes list of the world's wealthiest people and was the wealthiest overall from 1995 to 2014 — excluding a few brief periods post-2008. Between 2009 and 2014 his wealth more than doubled from $40 billion to more than $82 billion. Between 2013 and 2014 his wealth increased by $15 billion, or around $1.5 billion more than the entire GDP of Iceland in 2014.During his career at Microsoft, Gates held the positions of CEO and chief software architect, he was also the largest individual shareholder up until May 2014.He has also authored and co-authored several books.In 2015 Government of India awarded The Padma Bhushan the third highest civilian award of The Republic of India for Gates and his wife Melinda for their contribution in Social work.