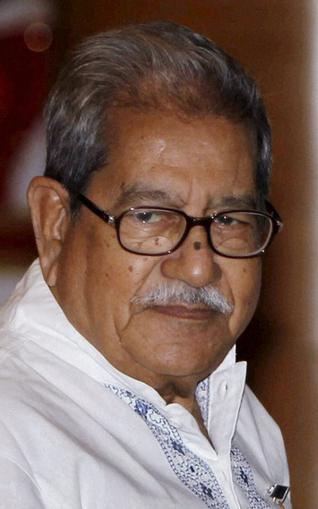 Anisuzzaman is a Bangladeshi academic of Bengali literature. He was born on February 18, 1937 in Kolkata. Anisuzzaman was a professor of Bengali at the University of Dhaka. Presently, he is professor emeritus in the same department. Anisuzzaman's publications include Muslim-manas O Bangla Sahitya (Dhaka, 1964), Swaruper Sandhane (Dhaka, 1976), Purono Bangla Gadya (Dhaka, 1984), Bangali Nari: Sahitye O Samaje (Dhaka, 2000), Kal Nirabadhi (Dhaka, 2003) and Ihajagatikata O Anyanya (Kolkata, 2012); Factory Correspondence and other Bengali Documents in the India Office Library and Records (London, 1981), Creativity, Reality and Identity (Dhaka, 1993), Cultural Pluralism (Kolkata, 1993) and Identity, Religion and Recent History (Kolkata, 1994). Notable among his edited works are Rabindranath (Dhaka, 1968), Sardhashatavarshe Rabindranath (Kolkata, 2012), Bangla Sahityer Itihas, vols. I & II (with others, Dhaka, 1987 & 2008), and Culture and Thought (with Anouar Abdel-Malek, London, 1983). He has received the Bangla Academy Award and the Ananda Purashkar for his work in the field of Bengali literature. In 2011 he received the Pandit Iswarchandra Vidyasagar Gold Plaque from the Asiatic Society of Kolkata. In 2014, the government of India conferred the Padma Bhushan, third highest civilian honour, on him; the first such award for any Bangladeshi. On 4th of March, 2015, he received the Independence Award - the highest civilian honour in Bangladesh.