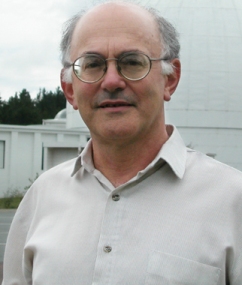 Ken Freeman, (born 27 August 1940) is an Australian astronomer and astrophysicist who is currently Duffield Professor of Astronomy in the Research School of Astronomy and Astrophysics at the Mount Stromlo Observatory of the Australian National University in Canberra. He was born in Perth, Australia in 1940, studied mathematics and physics at the University of Western Australia, and graduated with first class honours in applied mathematics in 1962.

He then went to Cambridge University for postgraduate work in theoretical astrophysics with Leon Mestel and Donald Lynden-Bell, and completed his doctorate in 1965.His research interests are in the formation and dynamics of galaxies and globular clusters, and he is particularly interested in the problem of dark matter in galaxies: he was one of the first to point out that spiral galaxies contain a large fraction of dark matter.[2] He regularly visits the Space Telescope Science Institute as Distinguished Visiting Scientist.He received Gruber Prize in Cosmology in 2014.