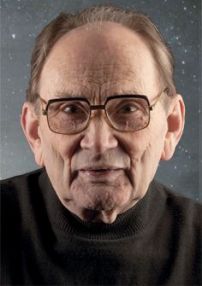 Jaan Einasto (born 23 February 1929, in Tartu) is an Estonian astrophysicist and one of the discoverers of the large-scale structure of the Universe.He is a patriotic Estonian; the name "Einasto" is an anagram of "Estonia".Born in Tartu, he attended the University of Tartu, where he received the Ph.D. equivalent in 1955 and a senior research doctorate in 1972.

From 1952, he has worked as a scientist at the Tartu Observatory (1977–1998) Head of the Department of Cosmology; in 1992-1995, he was Professor of Cosmology at the University of Tartu. For a long time, he was Head of the Division of Astronomy and Physics of the Estonian Academy of Sciences in Tallinn. Einasto is a member of the Academia Europaea, the European Astronomical Society and the Royal Astronomical Society; he has received three Estonian National Science Awards.He received Gruber Prize in Cosmology in 2014.