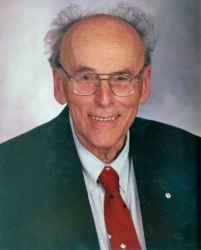 Sidney Van den Bergh(born 20 May 1929, Wassenaar) is a retired Canadian astronomer.Born in the Netherlands, son of businessman and politician Sidney James van den Bergh and grandson of Unilever co-founder Samuel van den Bergh, he showed an interest in science from an early age, learning to read with books on astronomy.In addition to being interested in astronomy, he also liked geology and archeology.His parents got him science books, a telescope, and a microscope, although they wished him to pursue a more practical career and only follow astronomy as a hobby.He went to Leiden University in the Netherlands from 1947–1948. He then attended Princeton University on scholarship where he received his A.B. in 1950.

In December 1950, he was living in Columbus, Ohio and evidencing an interest in Astronomy.He obtained an M.Sc. from Ohio State University (1952) and a Dr. rer. nat. from the University of Göttingen (1956).The second part of his career began in 1978 in Victoria, British Columbia, at the Dominion Astrophysical Observatory where he was appointed director in 1977 and took office in 1978, remaining in that position until 1986 when he semi-retired and took the new role of principal research officer.He has served as President of the Canadian Astronomical Society and as Vice-President of the International Astronomical Union from 1972 to 1982.He received Gruber Cosmology Prize in 2014.