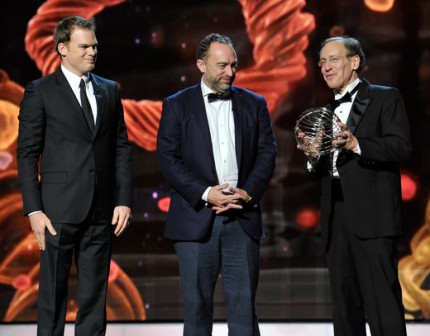 Robert Samuel Langer, Jr. FREng(born August 29, 1948 in Albany, New York) is an American engineer, scientist, entrepreneur, inventor and the David H. Koch Institute Professor at the Massachusetts Institute of Technology.He was formerly the Germeshausen Professor of Chemical and Biomedical Engineering and maintains activity in the Department of Chemical Engineering and the Department of Biological Engineering at MIT. He is also a faculty member of the Harvard-MIT Division of Health Sciences and Technology and the David H. Koch Institute for Integrative Cancer Research. He is a widely recognized and cited researcher in biotechnology, especially in the fields of drug delivery systems and tissue engineering.

He has been cited over 151,000 times and has an h-index of 200 as of September 15, 2014.Langer's research laboratory at MIT is the largest biomedical engineering lab in the world, maintaining over $10 million in annual grants and over 100 researchers.Langer is also currently on the board of directors at Bind Therapeutics and Advanced Cell Technology.In 2015, Langer was awarded the Queen Elizabeth Prize for Engineering, the most influential prize in the world for engineering.He receive the Breakthrough Prize in Life Sciences in 2014 for his discoveries leading to the development of controlled drug-release systems and new biomaterials.