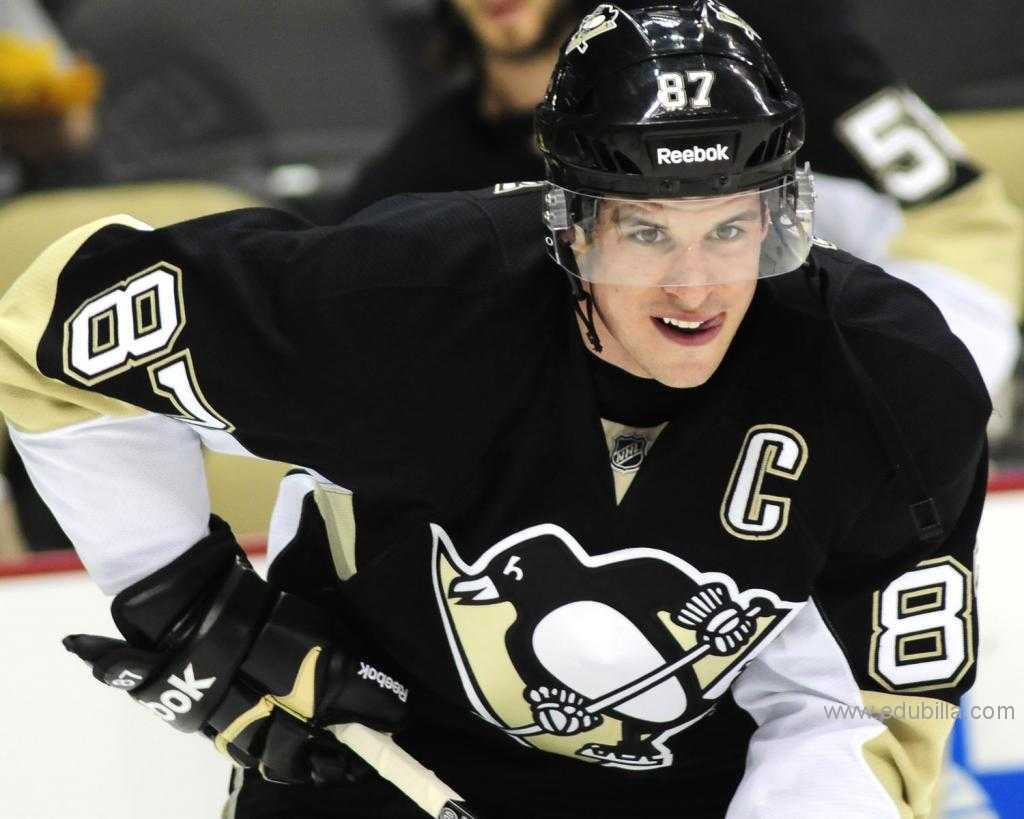 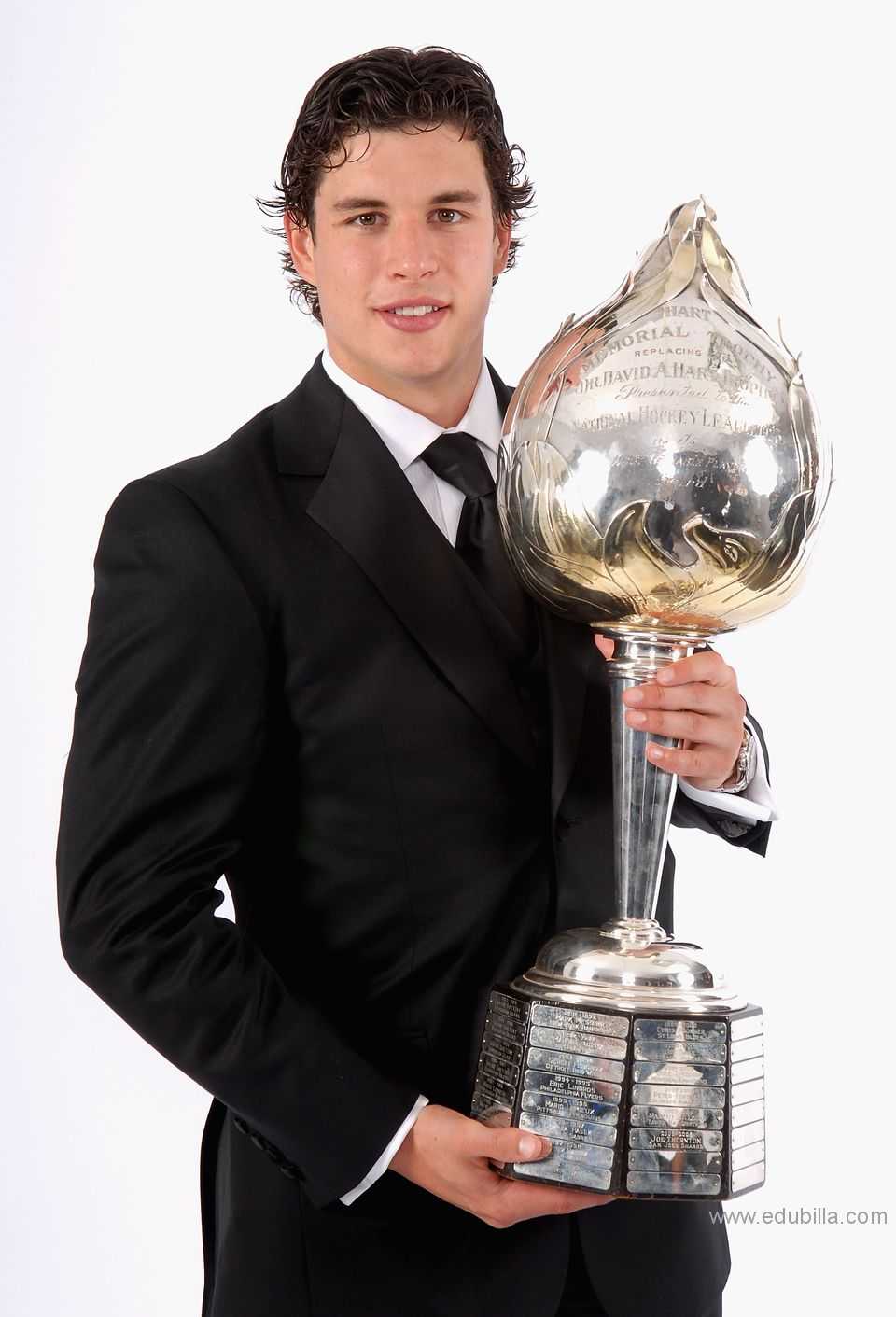 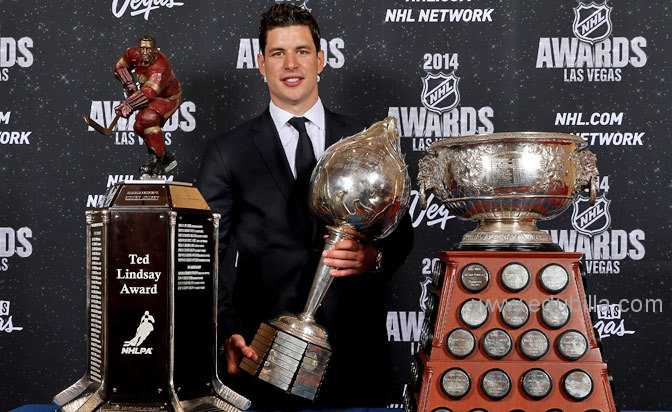 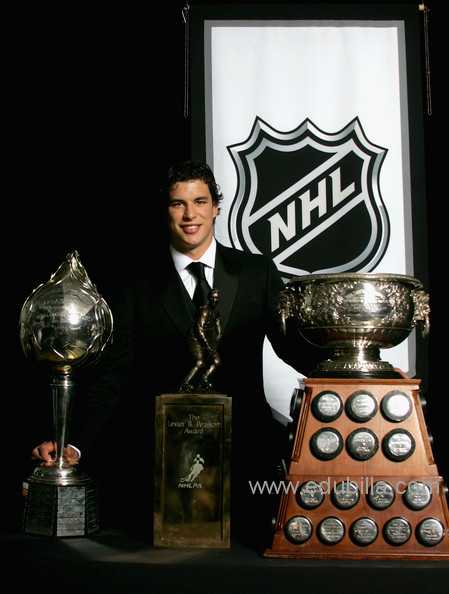 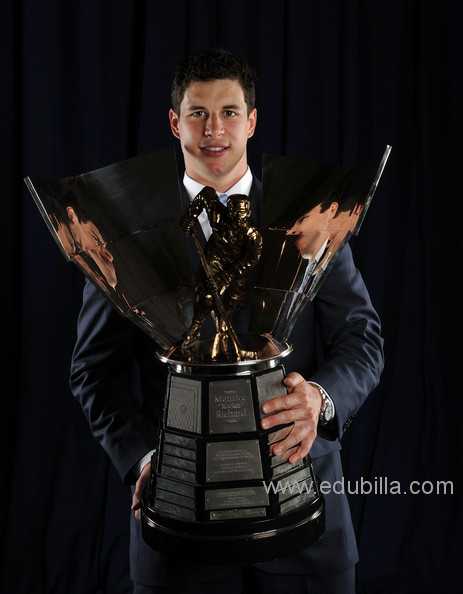 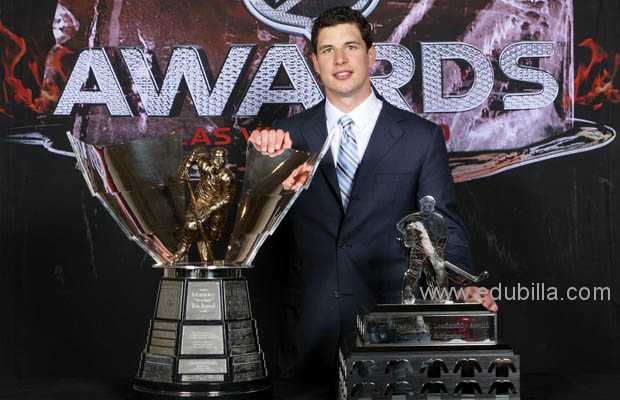 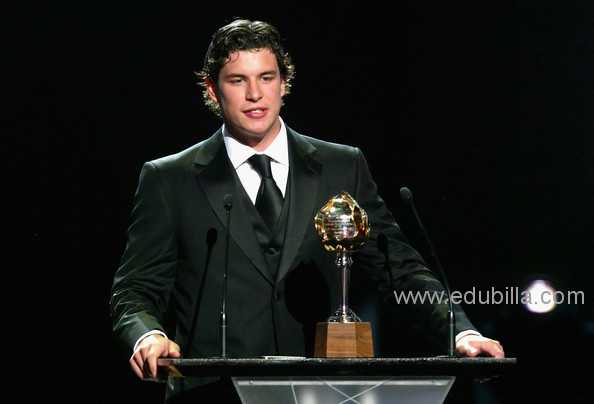 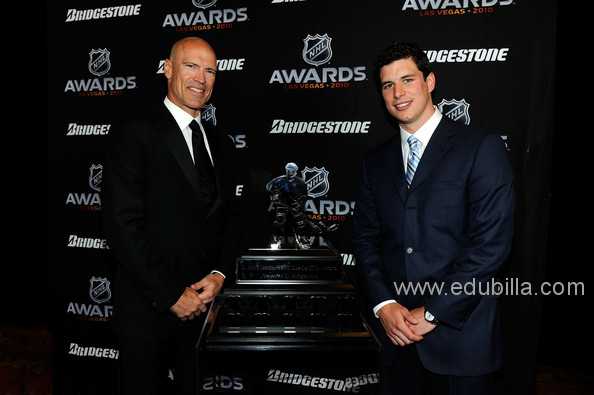 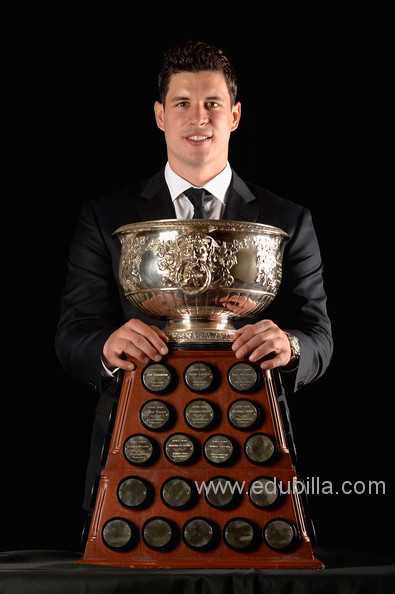 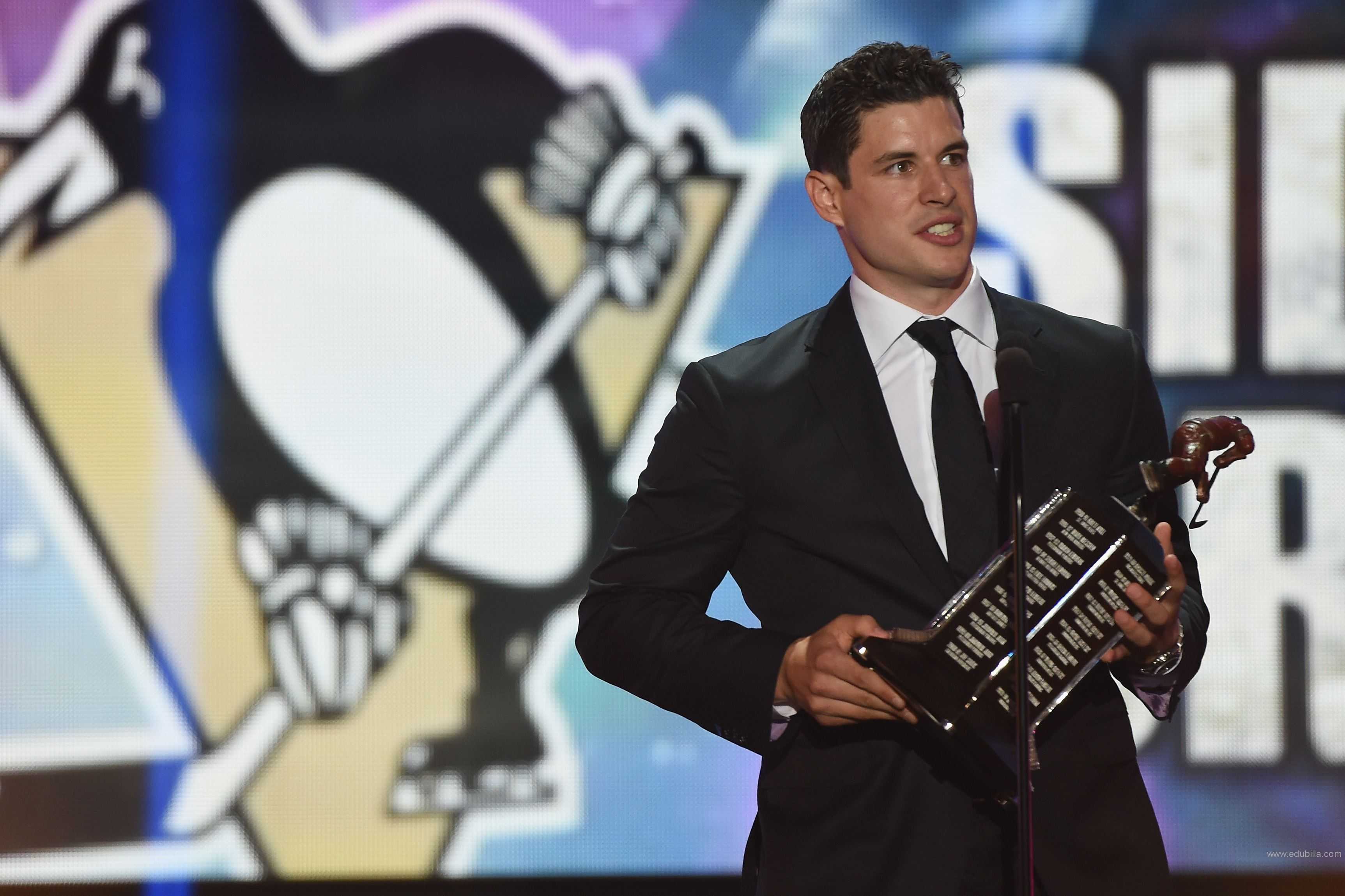 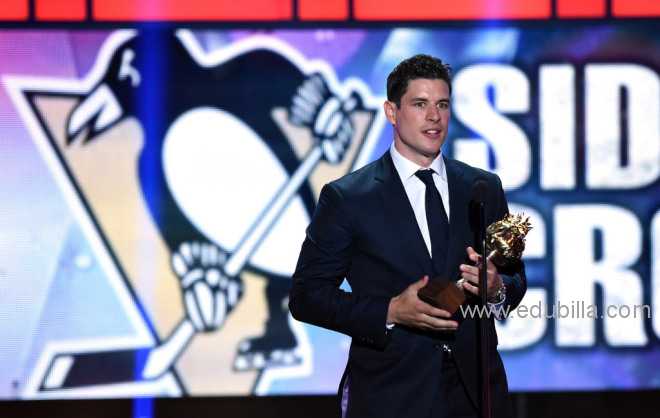 Sidney Patrick Crosby, ONS (born August 7, 1987) is a Canadian professional ice hockey player who serves as captain of the Pittsburgh Penguins of the National Hockey League (NHL). Crosby was drafted first overall by the Penguins out of the Quebec Major Junior Hockey League (QMJHL). During his two-year major junior career with the Rimouski Océanic, he earned back-to-back CHL Player of the Year awards and led his club to the 2005 Memorial Cup final. Nicknamed "The Next One",he was one of the most highly regarded draft picks in hockey history, leading many to refer to the 2005 Draft Lottery as the "Sidney Crosby Sweepstakes".

In his first NHL season, Crosby finished sixth in league scoring with 102 points (39 goals, 63 assists) and was a runner-up for the Calder Memorial Trophy (won by Alexander Ovechkin). By his second season, he led the NHL with 120 points (36 goals, 84 assists) to capture the Art Ross Trophy, becoming the youngest player and the only teenager to win a scoring title in any major North American sports league. That same season, Crosby won the Hart Memorial Trophy as the Professional Hockey Writers Association's choice for most valuable player and the Lester B. Pearson Award as the NHL Players Association's choice for most outstanding player, becoming the seventh player in NHL history to earn all three awards in one year.

Crosby started the 2007–08 season with the team's captaincy and subsequently led them to the 2008 Stanley Cup Finals, where they were defeated by the Detroit Red Wings in six games. The Penguins returned to the Finals against Detroit the following year and won in seven games; Crosby became the youngest captain in NHL history to win the Stanley Cup.In the 2009–10 season, Crosby scored a career-high 51 goals, tying him with Steven Stamkos for the "Rocket" Richard Trophy as the league-leader; with 58 assists, he totaled 109 points, second in the NHL. During the off-season, Crosby received the Mark Messier Leadership Award. In 2010–11, Crosby sustained a concussion as a result of hits to the head in back-to-back games. The injury left him sidelined for ten and a half months. However, after playing eight games in the 2011–12 season, Crosby's concussion-like symptoms returned in December 2011, and he did not return until mid-March 2012 after extended treatment by neurologists at UPMC and chiropractic neurologist Ted Carrick, whom Crosby credits with helping him return to hockey.

Internationally, Crosby has represented Canada in numerous tournaments for the country's junior and men's teams. After competing in the 2003 U-18 Junior World Cup, he represented Canada in back-to-back IIHF World U20 Championships, winning silver in 2004 and gold in 2005. At the 2006 IIHF World Championship, he led the tournament in scoring, while also earning Top Forward and All-Star Team honours. Four years later, Crosby was named to Team Canada for the 2010 Winter Olympics in Vancouver. Playing the United States in the gold medal game, he scored the game-winning goal in overtime.He captained the 2014 Canadian Olympic Hockey Team at the Sochi Olympics, leading the team to a Gold Medal victory over Sweden.

The Hart Memorial Trophy, originally known as the Hart Trophy, is awarded annually to the "player judged most valuable to his team" in the National Hockey League.

The Best NHL Player ESPY Award has been presented annually since 1993 to the National Hockey League player, irrespective of nationality, adjudged to be the best in a given calendar year, typically most significantly in the NHL season contested during or immediately prior to the holding of the ESPY Awards ceremony.

The Ted Lindsay Award, formerly known as the Lester B. Pearson Award, is awarded annually to the National Hockey League's most outstanding player in the regular season as judged by the members of the NHL Players Association. It has been awarded 42 times to 24 different players since its beginnings in 1971. It is a companion to the Hart Memorial Trophy, which is awarded to the League's Most Valuable Player, as judged by members of the Professional Hockey Writers' Association

The Maurice "Rocket" Richard Trophy, also known as the Maurice Richard Trophy,is awarded annually to the leading goal scorer in the National Hockey League (NHL). It was donated to the NHL by the Montreal Canadiens hockey club in 1998–99 and is named in honour of the legendary Montreal Canadiens right winger Maurice "Rocket" Richard and was first won by Teemu Selanne. The current holder is Alexander Ovechkin of the Washington Capitals, who scored 51 goals during the 2013–14 season.

The Art Ross Trophy is awarded to the National Hockey League player who leads the league in scoring points at the end of the regular season.It was presented to the NHL by former player, general manager, and head coach Art Ross. The trophy has been awarded 65 times to 27 players since its inception in the 1947–48 NHL season. Ross is also known for his design of the official NHL puck, with slightly bevelled edges for better control.

The Mark Messier Leadership Award is a National Hockey League (NHL) award that recognizes an individual as a superior leader within their sport, and as a contributing member of society. The award is given to a player selected by Mark Messier to honor an individual who leads by positive example through on-ice performance, motivation of team members and a dedication to community activities and charitable causes. It was first awarded during 2006–07 NHL season and sponsored by Cold-fX.