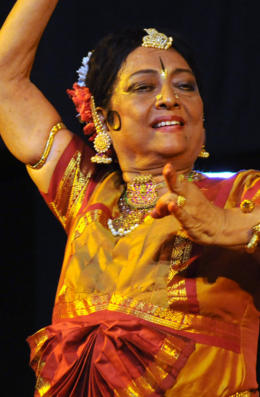 Yamini Krishnamurthy is one the earliest classical dancers in India. She is a trained dancer in two different forms Bharatanatyam and Kuchipudi. She was born on 20 December 1940 in Madanapalle, Andhra Pradesh. Yamini Krishnamurthy received the initial training of Bharatnatyam from Rukmini Devi Arundale.at Kalakshetra School of Dance, Chennai. She was, later, groomed by eminent masters like Kanchipuram Ellappa Pillai and Thanjavur Kittappa Pillai. She learnt Kuchipudi under the guidance of Vedantam Lakshmi Narayana Shastri, Chinta Krishnamurthy and Pasumarthy Venugopal Krishna Sharma. Besides Bharatnatyam and Kuchipudi, Yamini also learnt Odissi from Guru Pankaj Charan Das and Kelucharan Mahapatra.

In 1957, at the age of seventeen years, Yamini Krishnamurthy performed her debut dance event in Chennai. Ever since, she had a colorful and eventful dancing career. Within three years of her maiden performance, Yamini became one of the most admired dancers of the country. Her performances brought accolades from national and international recognition arena. Yamini appeared as one of the leading classical dancers of India. To impart training to younger dancers, Yamini Krishnamurthy started the 'Yamini school of Dance' in Delhi in 1990. She has also made a special program on dance for Doordarshan channel. Her book 'A Passion for Dance' was well-received and appraised by the critics. Her dancing career brought her many awards, including the Padma Shree (1968) and the Padma Bhushan (2001),Padma Vibhushan (2016), which are among the highest civilian awards of the Republic of India.