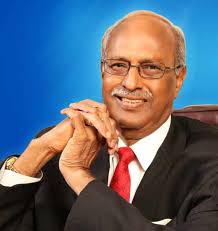 Gunupati Venkata Krishna Reddy, also referred to as GVK Reddy, is the Founder Chairman and Managing Director of GVK, a Hyderabad-based infrastructure conglomerate that is into energy, resources, airports, transportation, hospitality and life sciences. His company set up India's first independent power plant in Andhra Pradesh, in 1997. He was born on 22 March 1937 in Kothur village of Nellore district, Andhra Pradesh. He completed his basic schooling from Kothur, early college from Nellore and graduated from Osmania University in Hyderabad. GVK Reddy first got his start in business when his father G. Subbarami Reddy allowed the GVK Reddy to take control of the family's small construction firm. Reddy's first started out as a contractor but then branched into manufacturing by setting up Novopan Industries in Biscoe, North Carolina, as the license regime in India had left few opportunities. However, thanks to Mari Chenna Reddy, GVK Reddy later returned to India after receiving support from the Mari Chenna Reddy. He later pursued Owner/President Management (OPM) Program from Harvard Business School, USA.

Dr. GVK Reddy has been recognized for his dynamism, outstanding brilliance and invaluable contribution to the field of entrepreneurship and social upliftment. He was conferred with one of the highest civilian honours of Padma Bhushan by the Government of India in 2011 and has been bestowed with the honorary title, 'Doctor of Philosophy' by the renowned Jawaharlal Nehru Technological University, India.