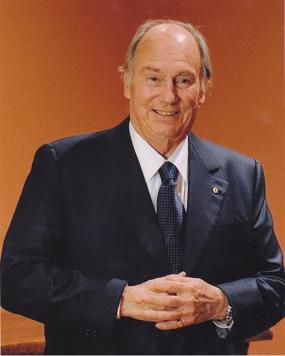 Prince Shah Karim Al Hussaini Aga Khan (IV) was born on December 13, 1936, in Geneva, Switzerland. He is a British business magnate, racehorse owner and breeder,as well as being the 49th and current Imam of Nizari Ismailism, a denomination of Ismailism within Shia Islam consisting of an estimated 5-15 million adherents (under 10% of the world's Shia Muslim population).He has held this position of Imam, under the title of Aga Khan IV, since July 11, 1957,when, at the age of 20, he succeeded his grandfather, Sir Sultan Muhammad Shah Aga Khan III.

The Aga Khan claims to be a direct descendant of the Islamic prophet Muhammad through Muhammad's cousin and son-in-law, Ali, considered the first Imam in Shia Islam, and Ali's wife Fatima az-Zahra, Muhammad’s daughter from his first marriage. In 1986 the Aga Khan ordained the current version of the Ismailia Constitution – an ecclesiastical decree affirming to Nizari Ismailis his "sole right to interpret the Qur'an and provide authoritative guidance on matters of faith" and formalising his sole discretion, power and authority for the governance of Nizari Ismaili jamats (places of worship) and institutions.Karim Al Hussaini Aga Khan have been awarded the Padma Vibhushan, the second highest civilian honour after the Bharat Ratna in 2015.