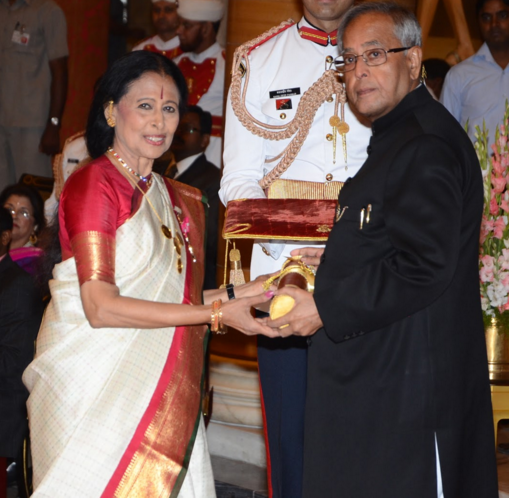 Saroja Vaidyanathan is a choreographer, guru and exponent of Bharatanatyam. She was conferred the Padma Shri in 2002 and the Padma Bhushan in 2013 by the Government of India. She was born on September 19, 1937 in Bellary, Karnataka. aroja Vaidyanthan took her initial training in Bharatanatyam under Shrimati Lalitha at the Saraswati Gana Nilayam in Chennai. She was later a student of the well-known guru Kattumannar Muthukumaran Pillai of Thanjavur. She also studied Carnatic music under Professor P. Sambamoorthy at Madras University, and obtained a D.Litt in dance from the Indira Kala Sangeet Viswavidyalaya, Khairagarh. Shrimati Saroja Vaidyanathan is well established today among the leading Bharatanatyam teachers of the country. She is the founder-director of Ganesa Natyalaya, a dance institution in Delhi, where she has trained a large number of young dancers. Some of her students are among the leading artists of the younger generation. She has travelled widely within the country and outside to participate in prestigious dance festivals. She has authored several books on dance and music including The Science of Bharatanatyam, Carnataka Sangeetham, Bharatanatyam: An In-depth Study, and Classical Dances of India. A documentary film on her work in the field has been produced by Media Craft Production. She is also the recipient of the Sahitya Kala Parishad Samman of the Government of Delhi, the Kalaimamani title bestowed by the Tamil Nadu Eyal Isai Nataka Manram and the Sangeet Natak Akademi Award. She was conferred the title of 'Bharata Kalai Sudar' in 2006.