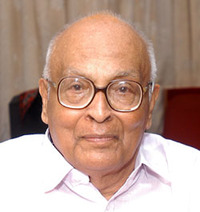 Alappat Sreedhara Menon was a historian from Kerala, India. He received the Padma Bhushan, India's third highest civilian honour, for Literature & Education in 2009. He was born on December 18, 1925 in Ernakulam. He completed his M.A. Degree in history as a private candidate from the University of Madras with first rank in 1948. From 1944 to 1949, he worked as a teacher in St. Thomas College, Thrissur and subsequently joined the University College, Thiruvananthapuram in 1949 as a member of the teaching staff in the departments of History and Politics. In 1953, he was granted the Smith Mundt Scholarship and the Fulbright Travel Grant by the US Educational Foundation in India for higher studies at Harvard University where he obtained his master's degree in political science, specialising in International Relations.

Worked in various capacities such as Professor of History, State Editor of the Kerala Gazetteers, Registrar of the University of Kerala and UGC visiting Professor in the University of Calicut. He held many other positions during his eventful career. Apart from compiling eight District Gazetteers of Kerala he has written more than 25 books in English and Malayalam. Menon was a member of several academic bodies like the Senate, Academic Council, Board of Studies, Board of Examiners etc. in universities in South India. Among the endowment lectures he delivered, the most important was the Bhaktavatsalam Endowment Lectures on National Integration and Chitti Babu Thiruvizha Endowment Lectures in Madras University. In 2000 he was elected the President of Vishakappattanam South Indian History Congress. He has served as President of Senior Citizens Association of Thiruvananthapuram for three years and President of Trivandrum District Unit of Kerala State Consumer Protection Council for a few years.