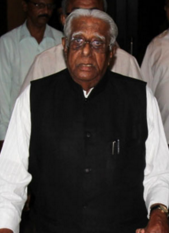 Later he also was the member of Rajya Sabha for one term from 1992 to 1998. In 1996, under his chairmanship, the Smita Patil Charitable Trust was founded in memory of his daughter. The trust runs a Smita Patil Public School in the village of Dahiwad in Shirpur taluka of Dhule district with a mission to impart quality education to students in rural area. As of 2012 he is one of the directors of the National Federation of Cooperative Sugar Factories.