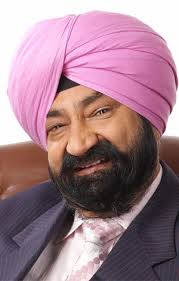 Jaspal Singh Bhatti was an Indian television personality famous for his satirical take on the problems of the common man. He is most well known for his television series Flop Show and mini capsules Ulta Pulta which ran on Doordarshan, India's national television network, in the late 1980s and early 1990s. He was also known as the "King of Comedy". In 2013, he was honoured with the Padma Bhushan India's third highest civilian award. He was born on March 3, 1955, Amritsar, Punjab, India. He graduated from Punjab Engineering College, Chandigarh in North India, as an electrical engineer. He was famous for his street plays like his My Nonsense Club during his college days. Most of these plays were spoof ridiculing the corruption in the society. Before venturing out in to television, he was a cartoonist for the Tribune newspaper in Chandigarh. Bhatti acted in Hindi Movie Aa Ab Laut Chalen with Kadar Khan in 1999. In his later years, Jaspal Bhatti set up a training school and a studio in Mohali near Chandigarh called "Joke Factory". In 2009, Bhatti school's, Mad Art's, animation film on female foeticide won the second prize in the Advantage India organised by 1take media. It won a certificate of merit at the IDPA-2008 Awards in Mumbai. Bhatti was granted the Lifetime Achievement Award, at the first Golden Kela Awards.