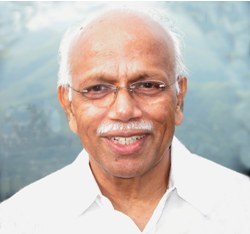 B. M. Hegde is an Indian physician and educational administrator. He received Padma Bhushan award from Government of India for his contributions to medical field. His full name is Belle Monappa Hegde. He was born on 18 August 1938 in Udupi District, Karnataka, India. He is a medical practitioner and completed his M. B. B. S. degree from Madras University. He went on to study M. D. in Lucknow University and got his FRCP from London University. He got FRCPI from Dublin University and has acquired FACC and FAMS too. He was trained in cardiology at Harvard Medical School. He is serving as the Chairman of the Mangalore division of Bharatiya Vidhya Bhavan and served as the Vice Chancellor of Manipal University. He has written many books in English and Kannada languages and has published many medical research papers. He is serving as the affiliate professor of Human Health at the University of Northern Colorado from the year 2002. He also serves as the member of the Postgraduate Medical Education Board and Chairman at Bihar State Health Societyâ??s Expert Committee.

The two new diagnostic methods that he had invented help in the reduction of cost of cardiac problem investigations. He also invented the new method of treating high blood pressure with lesser drugs. He has authored 35 books and published 289 research papers in various languages. His latest book was What Doctors Donâ??t Get To Study in Medical School and this was published in UK. He was praised by British Prime Minister Tony Blair for his book Holistic Living.