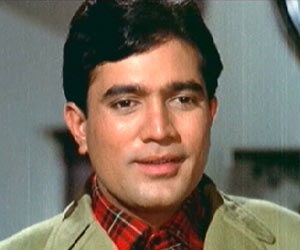 Rajesh Khanna born Jatin Khanna was a Bollywood actor, film producer and politician. He is referred to as the "first superstar"  and the "original superstar" of Indian cinema. He starred in 15 consecutive solo hit films in the period 1969 to 1971. He was born on 29 December 1942 in Amritsar, Punjab, British India. During his career, he appeared in over 180 films. He won three Filmfare Best Actor Awards and was nominated for the same fourteen times. He was awarded the Filmfare Lifetime Achievement Award in 2005. Khanna is referred to as the “First Superstar” of Indian cinema. He had “the biggest and the maddest fan following, especially his female fans,” which, according to Entertainment One India, has not been duplicated since he rose to fame in the 1970s. He served a five year tenure as MP in the Indian parliament (1991–1996). After being critically ill, Khanna died on 18 July 2012.[16] Khanna has been posthumously awarded India's third highest civilian honour Padma Bhushan. On 30 April 2013 he was officially bestowed with the title The First Superstar of Indian cinema at Dadasaheb Phalke Academy Awards. He has also been honored with a stamp and statue of his likeness, and a road being renamed in his honor.