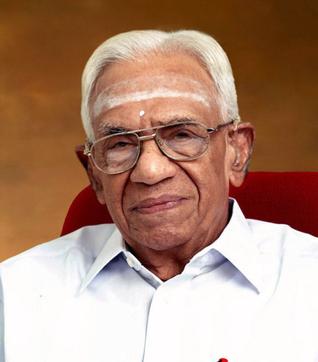 Panniyampilly Krishnankuty Warrier popularly known as P. K. Warrier, is an Indian Ayurvedic physician. He was born on 5 June 1921 in Kottakkal, Malappuram district in the state of Kerala, India. He is the chief Physician and Managing trustee of Arya Vaidya Sala. He studied Ayurveda in Arya Vaidya Pathasala, in the village of Kottakkal, in the Southern Indian state of Kerala. where he graduated as Aryavaidyan. In 1954, he was catapulted into the position of Managing Trustee of the then small Arya Vaidya Sala (AVS) in Kottakal. He has administered the entire institution ever since, concurrently holding the position of AVS's Chief Physician. Dr. Warrier is an exponent of holistic medicine. While practicing and propagating Ayurveda as a scientific system of healthcare, he also acknowledges the validity of other systems and keeps himself up to date with advances in other fields. He points out those aspects of the World Trade Organization's initiatives on patents and TRIPS with implications for Ayurveda and indigenous systems of healthcare. Similarly, he was a strong supporter of the World Health Organization's Alma Ata Declaration, advocating co-operative efforts in the field of medicine. He popularized the message contained in the UN declaration through his speeches and writings. His statesmanlike support for the Alma Ata Declaration won universal acclaim.

In recognition of his unique academic achievements, the University of Calicut conferred on him the degree of D. Litt. in May 1999. He was twice elected as president of the All India Ayurveda Congress, once in 1981 and again in 2003. In 1996, the Russian Medical Association invited him to attend its Ayurvedic Seminar in Moscow. In 1998, he led a team from Kottakkal to participate in the two-day Ayurveda Conference, 'Ayurveda for the 21st Century - Paradigm for Health' in New York. He chaired its Scientific Session, presenting a paper on Panchakarma. He also lectured at New York City's India Club to World Bank and IMF Executives. Many took advantage of his presence in the city for clinical consultations. This extensive tour and interaction with dignitaries generated a great deal of international interest in Ayurveda. In 1999 he was awarded an honorary D.Litt by University of Calicut. P.K. Warrier was awarded the 30th Dhanvanthri Award by the then Maharashtra Governor P. C. Alexander. Warrier received the Padma Shri in 1999 and the Padma Bhushan Award in 2010 from the Government of India for his contribution to Ayurveda.