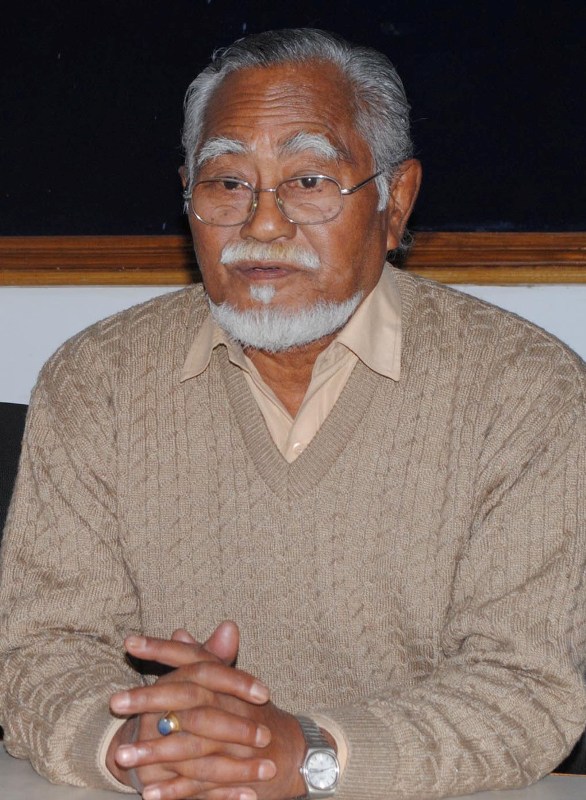 Heisnam Kanhailal is a noted art theatre personality from Indian state of Manipur . He was awarded Padma Shri award in 2004 and Padma Bhushan award in 2016 by Government of India for his work. He is the founder-Director of Kalakshetra Manipur, established in 1969, a theatre laboratory that explores a new vocabulary in the existing language of theatre. He was born on 17 January 1941 in Manipur, India. During his school days he was instrumental in staging many plays in various occasions. He was matriculated in 1959 and admitted to Imphal College. G.C. Tongbra who was then an acknowledge person of theatre both as a director and dramatist was serving in the college as a lecturer. It was in this college that Kanhailal did come into close contact with G.C. Tongbra. He then teamed up with many of his friends and established a small time theatre group called Students Artists Association. In 1961 he wrote and produced a play titled Layeng Ahanba (first treatment) in this group. Sabitri who is now his wife and a close collaborator of his activities in theatre acted in this play. They got married in 1962.

He joined as a casual clerk in the National Building Construction Company. The he switched over to a private school in a rural township called Mayang Imphal, and there he worked as a head master. It did not last for long. Next, he joined the Statistics Department as a Primary Investigator. In this way, he was in service for about ten years. Apart from this governmental work Kanhailal was also engaging deep in theatre activity with his won theatre group KALAKSHETRA Manipur which he established on 19 July 1969. For his contribution in the field of theatre Kanhailal have been received various awards both national and international some of them are Manipur State Kala Akademi Award for theatre in 1982, Central Sangeet Natak Akademi for direction for the year, 1985, the first ever awardees of SNA in the North East in the field of modern theatre.