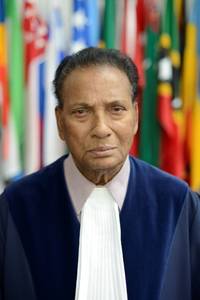 Patibandla. Chandrasekhara Rao is an Indian Jurist. He is from Guntur-Krishna District region of coastal Andhra Pradesh of what was then called Madras Presidency. Since October 1996 he is a judge at the International Tribunal for the Law of the Sea (ITLOS). He was the president of ITLOS from 1999 to 2002. He is also an honorary visiting professor at Damodaram Sanjivayya National Law University, Visakhapatnam. He was born on April 22, 1936 in India. After studying law at University of Madras Chandrasekhara Rao worked as researcher for the Indian Society of International Law. After that he worked as legal adviser for the Indian Ministry of Foreign Affairs until 1976. He also worked at the Permanent mission of India with the United Nations in New York from 1972 to 1976. From 1976 to 1996 he worked in various positions for the Indian Ministry of Justice. He also was Visiting Professor at Osmania University in Hyderabad and University of Madras. From 1994 to 2000 he was president of the Indian Society of International Law. He is awarded the Padma Bhushan award by the Government of India on 25 January 2012 for his contribution to the area of Public Affairs.