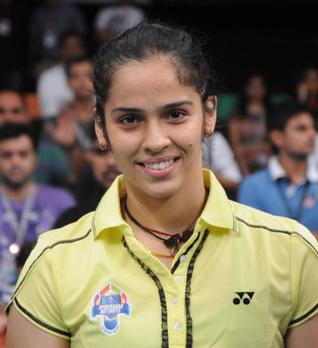 Saina started her badminton training under the apt guidance of S.M. Arif, who was a Dronacharya Awardee. She is currently coached by Indonesian badminton legend Atik Jauhari along with the former all England champion and national coach Pullela Gopichand as her mentor. Being born to Harvir Singh Nehwal, who is a scientist at Directorate of Oilseeds Research and Usha Nehwal, Saina Nehwal has always received the support of her family members. In 2006, Saina Nehwal became the first Indian woman to win a super-series tournament, the Philippines Open. In 2008, she became the first Indian to win the World Junior Badminton Championships. She also won the 2008 Chinese Taipei Open Grand Prix Gold, the Indian National Badminton Championships and the Commonwealth Youth Games in the same year. She was declared as the most promising player in 2008. In 2009, she became the first Indian to win the most prominent badminton series of the world - the Indonesia Open. She also reached the quarterfinals of world championship. Saina Nehwal was honoured with the Arjuna award and her coach Gopichand was also honoured with the Dronacharya award in August 2009. In 2016, he received the Padma Bhushan award.