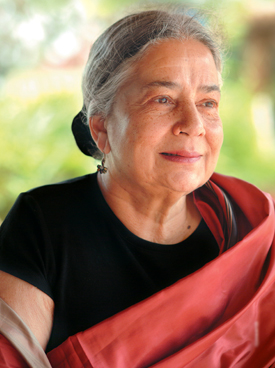 Anita Mazumdar Desai is an Indian novelist and the Emerita John E. Burchard Professor of Humanities at the Massachusetts Institute of Technology. As a writer she has been shortlisted for the Booker Prize three times; she received a Sahitya Academy Award in 1978 for her novel Fire on the Mountain, from the Sahitya Academy, India's National Academy of Letters; she won the British Guardian Prize for The Village by the Sea. In 2014, She received the Padma Bhushan Award. Anita Desai was born June 24, 1937 in Mussoorie, India to a German mother and an Indian father. She received a B.A. in English from the University of Delhi in 1957. The suppression and oppression of Indian women were the subjects of her first novel, Cry, the Peacock (1963), and a later novel, Where Shall We Go This Summer (1975). Fire on the Mountain (1977) was criticized as relying too heavily on imagery at the expense of plot and characterization, but it was praised for its poetic symbolism and use of sounds.

Other novels by Desai include In Custody (1984; film 1994) and Journey to Ithaca (1995). Fasting, Feasting (1999) takes as its subject the connections and gaps between Indian and American culture, while The Zigzag Way (2004) tells the story of an American academic who travels to Mexico to trace his Cornish ancestry. Desai also wrote short fiction—collections include Games at Twilight, and Other Stories (1978) and Diamond Dust, and Other Stories (2000)—and several children’s books, including The Village by the Sea (1982). The Artist of Disappearance (2011) collected three novellas that examined the collateral abandonment and dislocation wrought by India’s furious rush toward modernity.