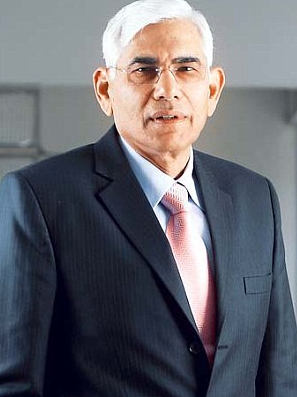 Vinod Rai was the 11th Comptroller and Auditor General of India.He assumed office on 7 January 2008 till 22 May 2013. He is the current chairman of UN Panel of External Auditors. He is currently Honorary Advisor to the Railways and a member of the Railway Kaya Kalp Council. In 2016, he received the Padma Bhushan. He was born on 23 May 1948 in Ghazipur, Uttar Pradesh. He did his schooling from Vidya Niketan - Birla Public School, BPS Pilani Rajasthan and graduated from Hindu College, University of Delhi. He has a master's degree in Economics from Delhi School of Economics, University of Delhi and master's degree in Public Administration from Harvard University, USA in 1988. Rai is a 1972 batch Kerala cadre officer of Indian Administrative Service (IAS). He started his career as the sub-collector of Thrissur District. Later, he became the Collector and spent his eight years of career in Thrissur City. He was called the second Sakthan Thampuran for his role in the development of the Thrissur City. He was the MD of Kerala State Co-operative Marketing Federation from 1977 to 1980. Later he was appointed as Principal Secretary (Finance) in the State Government of Kerala. He had served senior positions in the Ministries of Commerce and Defence, Government of India. Prior to his appointment as CAG, he served as Secretary, Financial Services and Additional Secretary in the Banking Division including banks and insurance companies under Ministry of Finance.