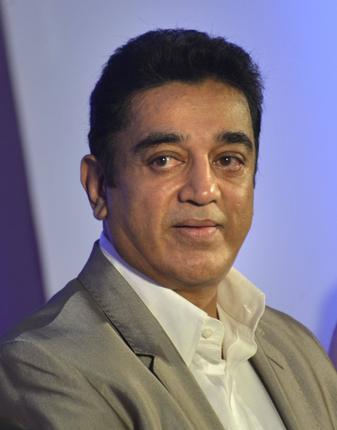 Kamal Haasan is an Indian film actor, screenwriter, director, producer, playback singer, choreographer, lyricist, philanthropist and dancer who works primarily in the Tamil film industry. Haasan has won several Indian film awards including four National Film Awards and 19 Filmfare Awards. With seven submissions, Kamal Haasan has starred in the highest number of films submitted by India for the Academy Award Best Foreign Language Film. Haasan's production company, Rajkamal International, has produced several of his films. Kamal Haasan received the Kalaimamani Award in 1979, the Padma Shri Award in 1990 and the Padma Bhushan Award in 2014. He was born on November 7, 1954 in Paramakudi.

After several projects as a child artist, Kamal Haasan's breakthrough into lead acting came with his role in the 1975 drama Apoorva Raagangal, in which he played a rebellious youth in love with an older woman. He secured his second Indian National Film Award for his portrayal of a guileless school teacher who tends a child-like amnesiac in 1982's Moondram Pirai. He was particularly noted for his performance in Mani Ratnam's Godfatheresque Tamil film Nayagan (1987), which was ranked by Time magazine as one of the best films of all time.  Since then he has gone on to appear in other notable films such as Anbe Sivam and his own productions, Hey Ram and Virumaandi, as well as Dasavathaaram, in which he appeared in ten distinct roles. In 2009, he became one of very few Indian actors to have completed 50 years in cinema.