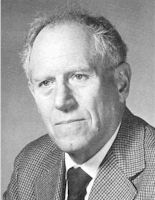 Rudolf Kompfner was an Austrian-born engineer and physicist, best known as the inventor of the traveling-wave tube (TWT). Rudolf Kompfner was born in Vienna, Austria on 16 May 1909. Various circumstances impelled him to study architecture at the Technische Hochschule in Vienna, where he received his Diplom Engineer in 1933. He then moved to England, where he served with P. D. Hepworth as an architectural apprentice from 1934 to 1936, and as an architect with Franey and Sons, Builders from 1936 to 1941. He received the IEEE Medal of Honor for his invention, and in 1974 received the National Medal of Science. Kompfner died on December 3, 1977, in Stanford, California.