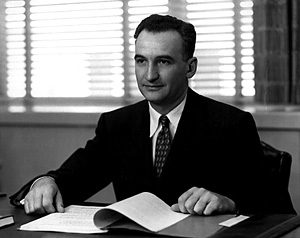 Simon Ramo is an American physicist, engineer, and business leader. He led development of microwave and missile technology and is sometimes known as the father of the intercontinental ballistic missile (ICBM). He was born on May 7, 1913 in Salt Lake City, Utah. He entered the University of Utah at the age of 16, and earned a B.S. in Electrical Engineering. By 1936, at the age of twenty-three he had earned dual Ph.D. degrees from Caltech in Physics and Electrical Engineering. From 1936 until 1946 he led electronics research at General Electric. He became globally recognized as a leader in microwave research and headed the development of GE’s Electron microscope. He also published textbooks on Fields and Waves in Modern Radio (1944) and Introduction to Microwaves (1945). While working for General Electric as a scientist, he pioneered the use of microwave electronics and was awarded the National Medal of Science by President Jimmy Carter.