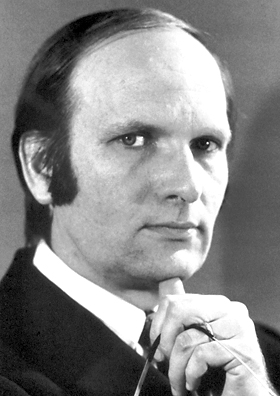 John Robert Schrieffer is an American physicist and, with John Bardeen and Leon N Cooper, recipient of the 1972 Nobel Prize for Physics for developing the BCS theory, the first successful microscopic theory of superconductivity. John Robert Schrieffer was born in Oak Park, Illinois on May 31, 1931. Schrieffer was educated at the Massachusetts Institute of Technology, Cambridge, and the University of Illinois, Urbana-Champaign, where he received his Ph.D. in 1957. He was a young graduate student working under Bardeen at the University of Illinois when he helped explain why metals lose their electrical resistance at very low temperatures. His awards include the Guggenheim Fellowship, Oliver E. Buckley Solid State Physics Prize, Comstock Prize, National Academy of Science, the Nobel Prize in Physics shared with John Bardeen and Leon N. Cooper in 1972, John Ericsson Medal, American Society of Swedish Engineers, University of Illinois Alumni Achievement Award, and in 1984 the National Medal of Science. The main thrust of his recent work has been in the area of high-temperature superconductivity, strongly correlated electrons, and the dynamics of electrons in strong magnetic fields.