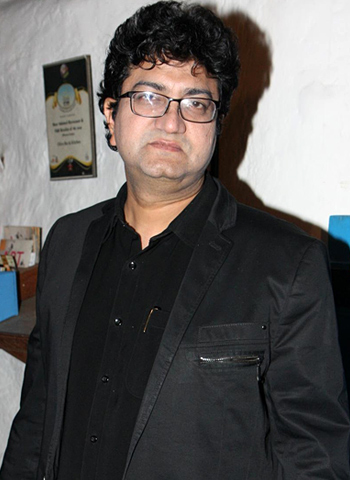 Prasoon Joshi is an Indian lyricist, screenwriter and advertising copywriter. A prolific Writer-Poet whose first book of 3 books "Main aur Woh" was published when he was 17 years of age, an internationally acclaimed Indian advertising professional, Bollywood film songwriter, as well as a dialogue and screenwriter who won Filmfare Best Lyricist Award, consecutively in 2007 and 2008, columnist , a respected speaker. Prasoon has also received the National Film Award for Best Lyrics twice, once for his work in Taare Zameen Par (2007), and Chittagong (2013). Prasoon was born on 16 September 1971 in Almora, Uttarakhand, India. He started writing early in life and published his first book at age 17, Main aur Woh - a 'conversation with himself', inspired by Frederich Nietzsche's Thus Spake Zarathustra , subsequently he has published two more books. After his schooling, he did his B.Sc. and Post Graduation in Physics, thereafter he did his MBA from Institute of Management Technology, a business school located in Ghaziabad in Uttar Pradesh, India. During his MBA education he decided to make his career in advertising.

He debut Bollywood as a lyricist for Raj Kumar Santhoshi's Lajja in 2002. Success of Lajja gave him an opportunity to work with Jatin - Lalit, for their last two films as composer duos, Hum tum and Fanaa. Both these films were musically and commercially successful and established Prasoon Joshi was a successful name in Bollywood. All the songs of both these movies were penned by Prasoon Joshi and all the songs remained in the top list too. Chand sifarsih, Chanda chamke, Hawa kuch hole and Mere haath mein of Fanaa and Title track, Sasom ko, Ladki kyon na jaane kyon and Chakde chakde of Hum tum were the top songs. Success of Fanaa prompted Aamir Khan to make use of his lyrics in Tare Zameen par as well as Rang de basanthi and both proved really worthwhile. Title track, Rooba roo, masthi ka paatsala and Khalbali were huge hits. He wrote its dialogues as well. Other big hits of Prasoon Joshi are Doop ke sikke of Sikander, Tu meri adoori pyaas and Kaise tum mujhe mil gaye of Gajani, Jinke ishare of Phir milenge, Kwaab ko rang de of London dreams, Beete kal se of Thoda pyar thoda magic and Bhor bhaya and Masakali of Delhi.