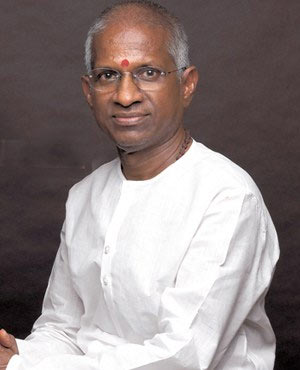 Ilaiyaraaja is an Indian film composer, singer, and lyricist. He is regarded as one of the finest music composers in India. Ilaiyaraaja is also an instrumentalist, conductor, and a songwriter. To date, he has composed over 4500 songs and provided film scores for more than 950 Indian films in various languages in a career spanning more than 30 years, particularly being acclaimed for his background scoring for Indian films. His songs and background score played a very crucial role in the success of many films. He remains one of the most popular composers ever in the South Indian film industry, and also in the list of world`s top selling music artists. Ilaiyaraaja has been a prominent composer of film music in South Indian cinema since the late 1970s. His works are mainly in Tamil and Telugu. He integrated folk lyricism (in Tamil) and introduced broader Western musical sensibilities into the South Indian musical mainstream. A gold medalist in classical guitar from Trinity College of Music, London, in 1993 he became the first Asian to compose a full symphony performed by the Royal Philharmonic Orchestra in London`s Walthamstow Town Hall. In 2003, according to a BBC international poll, people from 155 countries voted his composition "Rakkamma Kaiya Thattu" from the 1991 film Thalapathi fourth in the world`s top 10 most popular songs of all time. He was also nominated in the Best Indian album Music Awards category at US based Just Plain Folks Music Organization, which is the largest grassroots music organization in the world, and stood third for his "Music Journey: Live in Italy". He has won five Indian National Film Awards (the highest film honor in India); three for Best Music Direction and two for Best Background Score. In 2010 he has received Padma Bhushan, awarded by the Government of India.

Ilaiyaraaja was born into a poor rural Dalit family in Pannaipuram, Theni district, Tamil Nadu, India, as the third son of Daniel Ramaswamy and Chinnathayammal. Growing up in a rural area, Ilaiyaraaja was exposed to a range of Tamil folk music. At the age of 14, he joined a travelling musical troupe headed by his elder step-brother, Pavalar Varadarajan, and spent the next decade performing throughout South India.