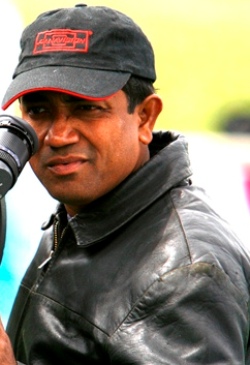 Sudeep Chatterjee is an Indian cinematographer of Hindi films, most known for his work in films like Dor (2006), Chak De! India (2007) and Guzaarish (2010). He was born in Kolkata, India. After he passed class 10 his father gave him a camera, which in time provided him with a career direction. After he finished his schooling he joined an engineering college, but after only eight months he left it to join the Film and Television Institute of India (FTII), Pune, where he studied cinematography. After passing out from FTII, he started his career in Kolkata making advertisements and documentaries, eventually after two years, filmmaker Anjan Dutt offered him Bada Din (1997), a Hindi film starring Shabana Azmi and Tara Deshpande. Thereafter he shifted based to Mumbai and started working TV serials like, Rishtey, Talaash etc. for a year before he won the Ram Gopal Verma's Road (2002).

Soon was working in film across genres, action, thriller and drama, and his in Salman Khan starrer, Lucky: No Time for Love (2005), where he shot the picturesque locales of Russia, followed by Nagesh Kukunoor's successive films Iqbal (2005) and Dor (2006), got him attention, and he got to do Chak De! India (2007) directed by Shimit Amin, where he grained down the colour of the film, and shot almost 80% of the movie with a hand-held camera, eventually winning him accolades and the 2008 Filmfare Best Cinematographer Award amongst others. His next important work was in Bengali film, Kaalpurush (2008), directed by acclaimed film director of Bengali cinema, Buddhadev Dasgupta, and starring Mithun Chakraborty and Rahul Bose, the film won the National Film Award for Best Feature Film. In 2010 came Guzaarish directed by Sanjay Leela Bhansali starring Hritik Roshan and Ashwariya Rai, Sundeep had previously apprenticed with Sanjay, also a fellow FTII student, in 1942: A Love Story, where he was the song director.