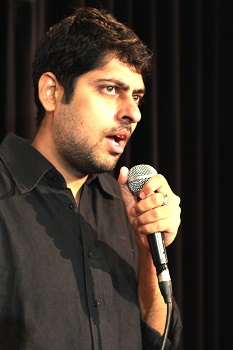 Varun Grover is an Indian comedian, screenwriter and lyricist. He won the award for Best Lyricist at the 63rd National Film Awards (India) 2015-16. He was born on 26 January 1980 in Sundernagar, Himachal Pradesh, India. He spent his initial years in Sundernagar and Dehradun, Uttarakhand, before moving to Lucknow, Uttar Pradesh for his adolescent years. He went on to graduate in Civil Engineering from Indian Institute of Technology (BHU) Varanasi in 2003. After working as a software consultant in an MNC in Pune, he moved to Mumbai in 2004 to chase his dream of becoming a writer. His first big break came in 2005 with much-acclaimed 'The Great Indian Comedy Show' where he was one of the six staff writers. He discovered his flair for stand-up comedy writing on that show which gave him confidence a few years later to attempt stand-up comedy on his own. Now he is one of the 30-odd stand-up comedians in India along with being a lyrics writer and screenplay writer for Hindi film industry.