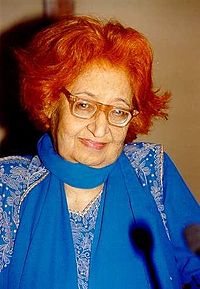 Qurratulain Hyder was Urdu novelist and short story writer. She was born on 20 January 1927 in Aligarh, Uttar Pradesh, India. Both of Hyder’s parents were writers. She attended Isabella Thoburn College and graduated from the University of Lucknow with a master’s degree in English literature. There she worked on documentary films for a time. She then went to England, where she worked for the BBC. In 1961 she returned to India and remained there, apart from travels and guest lectureships, until her death. In addition to writing, she worked as a radio and magazine journalist and taught at several universities in India and the U.S. Fluent in English and Urdu, she translated works of world literature from English into Urdu and works in Urdu including some of her own into English.

Her other works include Mere bhi sanamkhane (1948; My Temples, Too), Patjhar ki awaaz (1965; The Sound of Falling Leaves), The Street Singers of Lucknow, and Other Stories (1996; originally published in Urdu), A Season of Betrayals: A Short Story and Two Novellas (1999), and Akhir-i shab ke hamsafar (1994; Fireflies in the Mist). She received a number of notable literary awards during her lifetime, including India’s highest literary honour, the Jnanpith Award (1989); the Sahitya Akademi Award (1967) and a Sahitya Akademi fellowship (1994), the latter being the Indian government’s highest literary honour; and the Padma Shri (1984) and Padma Bhushan (2005), two of the country’s highest civilian honours.