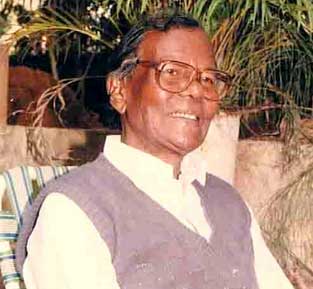 Gopinath Mohanty is arguably the greatest Oriya writer after Fakir Mohan Senapati. This novelist of middle twentieth century has received Jnanpith award in 1973 for his work. He is best known for portraying tribal life through his works and very often he is compared to Nigerian novelist, Chinua Achebe in this case. Dadi Budha, paraja, Amrutara Santana and Aphanca are the best examples of his significant work. He has also received Padmabhushan in 1981, Sahitya Akademi Award and Oriya Sahitya Akademi Award in the year 1993, Soviet Land Nehru Award in 1970, Fellowship for Creative Writing in Oriya by the U.G.C. in 1979 and D. Litt degree by Sambalpur University in 1976. His popular works - Paraja, Danapani, Laya Bilaya and Dadi Budha have been translated to English. He translated Tolstoy’s War and Peace and Togore’s Jogajog to Oriya.

The first novel, Mana Gahirara Chasa, was published in 1940. Dadi Budha (1944), Paraja (1945) and Amrutara Santan (1947) followed his first work.  Other noted works include - Danapani (1955), Laya Bilaya (1961), and Matimatala (1964). He published 10 collections of short stories, 24 novels, three plays, two biographies, two volumes of critical essays, and five books on the languages of Kandh, Gadaba and Saora tribes. He picked phrases and usages from the day-to-day speech of ordinary men and women and wisely used to beautify his works in his unique style. The vibrant life of people of Orissa can be read through his works. In 1974 for his prose-epic, Matimatala won Kendra Sahitya Akademi Award. For his Oriya Translation of Gorky’s work, he was awarded the Soviet Land Nehru Award in 1970. Gopinath passed away on 20 August 1991, aged 77.