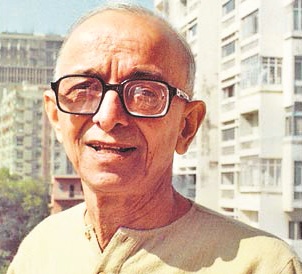 Umashankar Jethalal Joshi was an eminent poet, scholar and writer. He received the Jnanpith Award in 1967 for his contribution to Indian, especially Gujarati literature. Umashankar Joshi was born in small village named Bamna, taluka Bhiloda in District of Sabarkantha of Gujarat. He started his education at Primary school, Bamna in 1916. In 1921, he passed standard fourth in Idar school and continued his education till 1927 at Idar's Pratap High school; which was an Anglo-vernacular school. In 1927, he did matriculation from Proprietary High school, Ahmedabad. In 1928, he took Admission in Gujarat College, Ahmedabad and continued his education there till 1930. Then he took admission in Elphinstone College, Mumbai for BA. and there he was graduated with second division in Economics and History. After that, he got MA with first division in Gujarati and Sanskrit from Mumbai University.

Umashankar has published 70 books. In 1984, he compiled a comprehensive list of his publications. His noted works include "Ishavasya Upanishad”, "Satykam Jabal", "Gandhijini Shabdashakti", "Vaishnavjan" and "Baa". His powerful words rest on him in writing the immense potentials of the man to make the real world accessible to him. Umashankar Joshi preferred to introduce himself as 'an Indian writer writing in Gujarati' rather than a Gujarati writer. Other noted works include – Mahaprasthan, Gangotri, Vishwashanti, Abhigna, Akho ek Adhyayan and Haveli - collection of dramas.