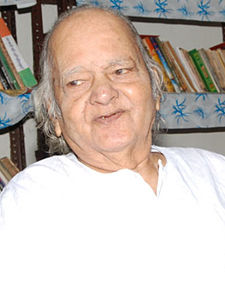 Amarkant was an Indian writer of Hindi literature. His novel Inhin Hathiyaron Se earned him the Sahitya Akademi Award in 2007, and Vyas Samman in year 2009. He was born on 1 July 1925 in Balliya, Uttar Pradesh, India. His short stories like 'Hatiyare', 'Dopahar ka Bhojan' and 'Diptee Kalaktari' are added to syllabus of various universities. When Jnanpith awards for the year 2009 and 2010 were declared in 2011 by Jnanpith award winner Dr. Sitakant Mahapatra, Amar Kant too was selected. He was given Jnanpith for the year 2009 along with Sri Lal Sukla for his contributions to Hindi literature.

Amar Kant’s short stories are often compared with the great ‘Premchand’ and is certainly is credited to add something better in that tradition by his own individuality. Yet it’s very shocking to know that the prominent writer who conquered millions of hearts through his powerful works and whose books are studied by school and college days, is fighting against diseases and poverty during his 90’s. It’s a great shame to this country and literary world when the shocking news was revealed by this author himself that he has already sold many of his original manuscripts at throwaway prices to meet daily requirements of food and medicine. He now even fears that he may be forced to sell his awards and medals in need of money as he is not able to meet even the monthly medical expenses of rupees 5000. A few of his works include - Aakash pakshi, Ek Dhani Vayakti Ka Bayan, Inhin Hathiyaron Se, Sukha Patta, Kale-Ujale din, Mittramilman Tatha Anya Kahaniyan , Sunnar Pandey Ki Patoh, Sukh Aur Dukh Ka Sath , Pratinidhi Kahaniyan : Amarkant , Gram sevika, Bich Ki Diwar and Desh Ke log.