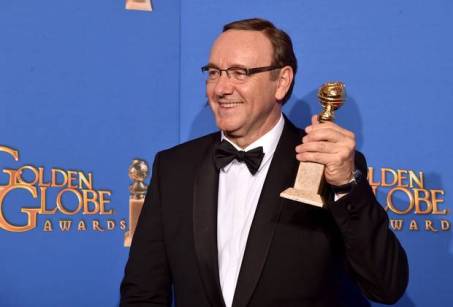 Kevin Spacey Fowler (born July 26, 1959), better known as Kevin Spacey, is an American actor, film director, writer, producer, and comedian. He began his career as a stage actor during the 1980s, before being cast in supporting roles in film and television. He gained critical acclaim in the early 1990s, culminating in his first Academy Award for Best Supporting Actor for the neo-noir crime thriller The Usual Suspects (1995), followed by an Academy Award for Best Actor for midlife crisis-themed drama American Beauty (1999).

During a career which has earned Spacey several Emmy and Golden Globe nominations, his other starring roles include the psychological thriller Seven (1995), the neo-noir crime film L.A. Confidential (1997), the drama Pay It Forward (2000), the science fiction-mystery film K-PAX (2001), and the role of Lex Luthor in the superhero film Superman Returns (2006). He was the artistic director of the Old Vic theatre in London from 2004 to 2014. Since 2013, Spacey has played Frank Underwood in the Netflix political drama series House of Cards.Kevin Spacey received the Best Actor in a TV series awarded at Golden Globes 2015 for Netflix's House of Cards.