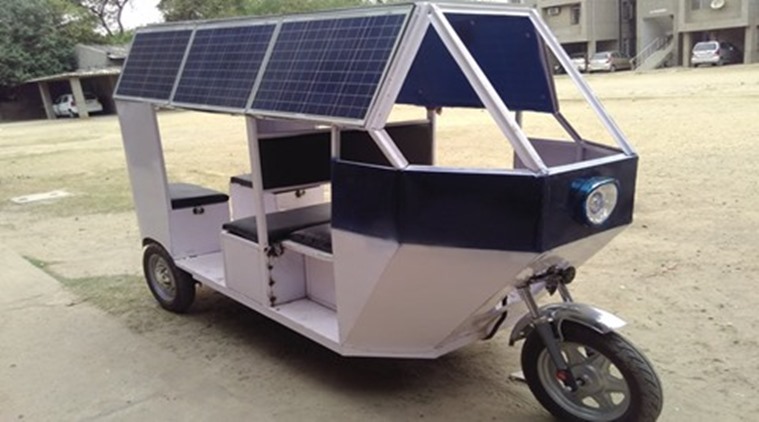 Netaji Subhash Institute of Technology (NSIT) students Vikram Pratap Singh and Taranpreet Singh has developed e-rickshaw powered by solar energy. They said that they got the idea for developing a mode of transport for the city that was 100% clean and relied on renewable energy while presenting a prototype for an electric bicycle at a college fest. Vikram Pratap has discussed with e-rickshaw drivers in Delhi, analyzed that recharging e-rickshaw is the major concern for them and then he decided to develop solar powered e-rickshaw.

Co-founder Taranpreet Singh said the solar panels in the rickshaw not only charge the rickshaw as the driver is driving, but also provide 50% more mileage than a normal e-rick. It relies on renewable energy. It has nine solar panels fitted at different angles where it allows for maximum amount of sunlight. Also, the rickshaw produces almost 360 watt power. It consists of four lead acid batteries with both batteries and solar panels. This solar e-rickshaw gives 50 per cent more mileage than a normal e-rickshaw. Moreover, the cost of this solar e-rickshaw will be around Rs. 1.2 lacs which is equivalent to a normal rickshaw.

They both have won many other awards at various college fests and this is their next level. Vikram Pratap Singh said that many have created solar ricks, but our technology is not just affordable, but also efficient. We have already patented it, but our dream remains to create an automobile that runs exclusively on solar energy and reaches an energy efficiency of at least 25-30 per cent. He added that the Delhi government has announced so many measures from vacuum cleaning the roads to the odd even policy. But we believe vehicles driven by renewable energy can really be a game changer in the city.