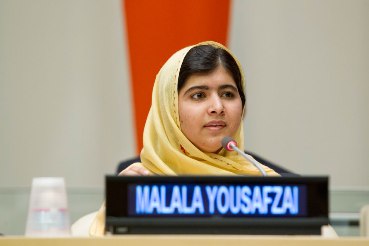 Malala Yousafzai (born 12 July 1997)is a Pakistani activist for female education and the youngest-ever Nobel Prize laureate.She is known mainly for human rights advocacy for education and for women in her native Swat Valley in the Khyber Pakhtunkhwa province of northwest Pakistan, where the local Taliban had at times banned girls from attending school. Yousafzai's advocacy has since grown into an international movement.

Her family runs a chain of schools in the region. In early 2009, when she was 11–12, Yousafzai wrote a pseudonymous blog for the BBC detailing her life under Taliban occupation, their attempts to take control of the valley, and her views on promoting education for girls in the Swat Valley. The following summer, journalist Adam B. Ellick made a New York Times documentary about her life as the Pakistani military intervened in the region. Yousafzai rose in prominence, giving interviews in print and on television, and she was nominated for the International Children's Peace Prize by South African activist Desmond Tutu.She received United Nations Prize in the Field of Human Rights honor award in 2013.