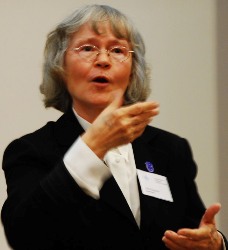 Liisa Kauppinen (12 May 1939) is a Finnish association councils, which operates internationally, Deaf rights. Kauppinen was awarded the United Nations Human Rights Prize first Finn to 10 December 2013 Human Rights Day . He received the award for International Deaf rights conducted on behalf of the life's work.Kauppinen work in 1995-2003 World Federation of the Deaf (World Federation of the Deaf) as Chairman and in the period 1976-2006 Association of the Deaf 's executive director. Kauppinen has also worked in various UN organizations such as the UN advisory missions in 1995-2006, as well as the World Health Organization WHO and UNESCO.Kauppinen has received an honorary doctorate at three times: in 1998, the Americans Gallaudet University , in 2004 Jyväskylä University , and in 2013 an Irish Trinity College.