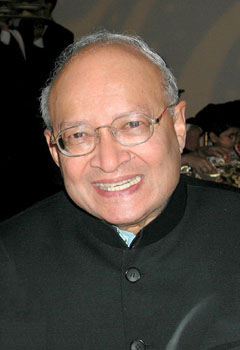 Thomas Kailath is an electrical engineer, information theorist, control engineer, entrepreneur and the Hitachi America Professor of Engineering, Emeritus, at Stanford University. Thomas Kailath was born in Pune, India, in 1935. He received the BE degree in telecommunications engineering from the University of Poona in 1956 and an MS and Sc.D. degrees in EE from MIT in 1959 and 1961, respectively. He claims to be the first student from India to receive a doctorate in EE from MIT. His master's thesis explored "Sampling Models for Time-Variant Filters," and his doctoral dissertation "Communication via Randomly Varying Channels." From 1961 to 1962 he worked at JPL in Pasadena, California, and concurrently taught part-time at California Institute of Technology. From 1963 to the present he has been a professor in the EE department at Stanford University. He was involved in the development of Stanford's Information Systems Laboratory from 1971 to 1981. In 1981, Kailath became a co-founder of Integrated Systems, Inc., a small company specializing in the development and licensing of high-level CAE (Computer-Aided Engineering) software and hardware products for the analysis, design and implementation of control systems in a variety of applications.

He has written several books, authored or co-authored over 300 journal articles and papers, and shared in the development of 13 patents. Specific contributions by him and his over ninety Ph.D. students and postdoctoral scholars include algorithms for feedback communications, universal estimator-correlator detector structures for random signals in noise and the concept of displacement structure leading to fast algorithms in many fields, such as estimation, control, direction of arrival estimation, adaptive filtering, channel identification and equalization, VLSI systems for signal processing, matrix theory and linear algebra. Much of his early work outpaced what could be implemented at the time. As technology advanced, Dr. Kailath and his students were able to successfully address industrial issues in areas such as optical lithography and multiple antenna wireless communications. He was awarded the Padma Bhushan award in 2009 by the Government of India for his contribution to Science and Engineering. He was selected by President Barack Obama for the National Medal of Science in 2014 along with other prominent scientists for "invaluable contributions to their fields and helping improve countless lives."