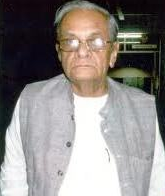 Dhirubhai Thaker was an Indian Gujarati writer, who was best known for creating the Gujarati Vishwakosh, a 25-volume encyclopedia of the Gujarati language. He was born on 27 June 1918 in Kodinar, Gujarat, India. He completed MA from Mumbai University in 1941. He was a professor at Gujarat College until 1960. He complelted his PhD in 1956 and joined Modasa College in 1960. He also served as a president of Gujarati Sahitya Parishad from 1999 to 2001. Thakar received his first award as student of junior Bachelor of Arts (BA) in Mumbai. He was the recipient of the Ranjitram Suvarna Chandrak, the highest literary award in Gujarati language, in 1994 and the Narmad Award in 2012. He was awarded Padma Bhushan on January 25, 2014 for his contribution in field of literature and education.