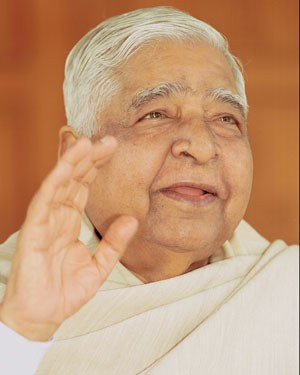 Satya Narayan Goenka commonly known as S.N. Goenka, was a Burmese-Indian teacher of VipassanÄ meditation. He was born on 30 January 1924 in Mandalay, Burma, British Indian Empire. His teaching was notable for emphasizing that the Buddha's path to liberation was non-sectarian, universal, and scientific in character. He became an influential teacher and established meditation centers worldwide. In November 2008 when the construction of the Global Vipassana Pagoda was completed on the outskirts of Mumbai. Goenka was an invited speaker at the Millennium World Peace Summit of Religious and Spiritual Leaders on 29 August 2000 at the United Nations in New York City. He was awarded the Padma Bhushan by the Government of India in 2012.

In 1969, Goenka was authorised to teach by Ba Khin, who died in 1971. He left his business to his family and moved to India, where he started teaching Vipassana meditation. Seven years later, in 1976, he opened his first meditation centre, Dhamma Giri, in Igatpuri near Nashik, Maharashtra. He taught meditation on his own until 1982, and then started training assistant teachers. He established the Vipassana Research Institute at Dhamma Giri in 1985. Today, Vipassana courses, in the tradition of Sayagyi U Ba Khin, are held at 227 locations in 94 countries, of which about 120 are permanent Vipassana meditation centres. There are such centres in the US, Canada, Australia, New Zealand, France, the United Kingdom, South Africa, Japan, Sri Lanka, Nepal, Myanmar, Thailand, and 56 centres in India. In 2000, Goenka laid the foundation of the 325 ft. high Global Vipassana Pagoda, near Gorai Beach, in Mumbai, which opened in 2009, and has relics of Buddha and a meditation hall. It was built as a tribute to his teacher, who in turn wanted to pay back the debt to India, the land of origin of Vipassana. However, unlike his protege, Ba Khin was unable to acquire a passport, and thus had been unable to travel to India in person.