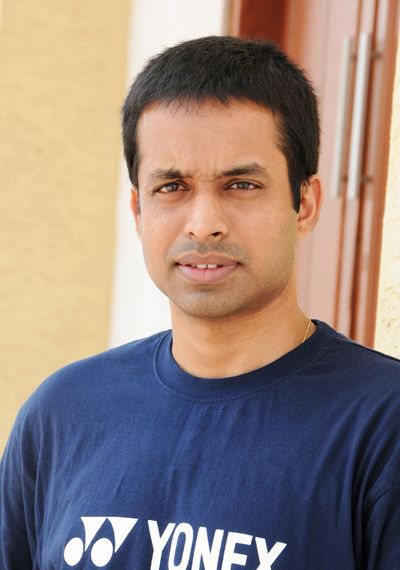 Pullela Gopichand is a former Indian badminton player. He won the All England Open Badminton Championships in 2001 becoming the second Indian to achieve this feat after Prakash Padukone. He runs the Gopichand Badminton Academy. He received the Dronacharya Award in 2009 and Arjuna Award in 1999. The only Indian to win the teacher and student awards, and the Padma Bhushan, India's third highest civilian award in 2014. He was born on the 16th of November 1973 at Nalgonda, Andhra Pradesh to Pullela Shubhash Chandra and Subbaravamanna. He did his schooling from St.Paul's High School, Hyderguda, Hyderabad.He joined A. V. College, Hyderabad and graduated in public administration. He was the captain of the Indian combined universities badminton team in 1990 and 1991. He won his first National Badminton Championship title in the year 1996, and won the title five times in a row, till the year 2000. Also, he won two Gold Medals and one Silver Medal at National Games 1998 held at Imphal. The same year, Gopichand led the State Badminton team of Andhra Pradesh to win the prestigious Rahmatulla Cup.

Gopichand made his debut into International Badminton in the year 1991 when he was selected to play against Malaysia. In his International Badminton career, he represented the nation in 3 Thomas Cup tournaments. In the year 1996 he grabbed a Gold Medal in the SAARC Badminton Tournament held at Vijayawada, and repeated the victory in the same tournament held at Colombo in 1997. At the Commonwealth Games, he won a Silver Medal in the team event and a Bronze Medal in the singles event. In 2006 the Badminton Association of India named Gopichand the coach of the Indian national badminton team, and in 2008 he opened a badminton academy in Hyderabad.