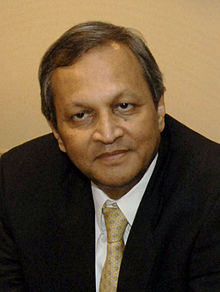 Ranendra "Ronen" Sen was India's ambassador to the United States of America from August, 2004 to March, 2009. His contribution to the landmark US India Nuclear deal is considered of immense importance. He was born on April 9, 1944 in Pune. After graduating from St. Xavier's College, Calcutta, Sen joined the Indian Foreign Service in July, 1966. From 1968 to 1984, he served in Indian missions/posts in Moscow, San Francisco, and in Dhaka, and in the Ministry of External Affairs. He has also been Secretary to the Atomic Energy Commission of India. From July 1984 to December 1985, Sen was joint secretary in the Ministry of External Affairs. He was thereafter joint secretary to the prime minister of India from January 1986 to July 1991, responsible for foreign affairs, defense and science and technology. Sen was ambassador to Mexico from September 1991 to August 1992; ambassador to the Russia from October 1992 to October 1998; ambassador to Germany from October 1998 to May 2002; and high commissioner to the United Kingdom from May 2002 to April 2004. Sen has participated in summit meetings in the United Nations, Commonwealth, Non-Aligned Movement, Six Nation Five Continent Peace Initiative, South Asian Association for Regional Cooperation, IAEA, G-15 and other forums and also in over 160 bilateral summit meetings. He was awarded the Padma Bhushan, the India's third highest civilian award in 2012.