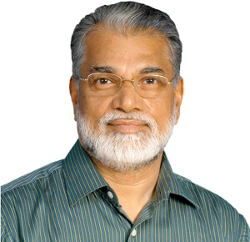 He started his career as an avionics engineer in Vikram Sarabhai Space Centre , Thiruvananthapuram (VSSC). He also held the important positions for International level as Vice chairman of intergovernmental oceanographic commission, chairman of the working group of the whole UN-COPOUS STSC. He was also the founder chairman of Indian Ocean Global Ocean observing system. In 2014, Radhakrishnan received the Padma Bhushan Award for his contribution to Science and Engineering, especially in the field of Space Science and Technology.