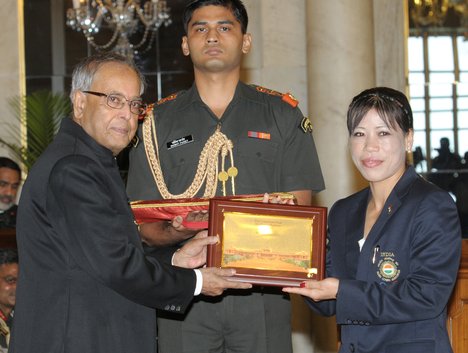 Mangte Chungneijang Mary Kom also known as MC Mary Kom, or simply Mary Kom, is a boxer from Manipur, India. She is a five-time World Amateur Boxing champion, and the only woman boxer to have won a medal in each one of the six world championships.  Nicknamed "Magnificent Mary", she is the only Indian woman boxer to have qualified for the 2012 Summer Olympics, competing in the flyweight (51 kg) category and winning the bronze medal.  She has also been ranked as No. 4 AIBA World Women's Ranking Flyweight category.  She became the first Indian woman boxer to get a Gold Medal in the Asian Games in 2014 in Incheon, South Korea.  Mary Kom is supported by Olympic Gold Quest. She was born on 1 March 1983 in Kangathei, Manipur, India to Mangte Tonpa Kom and Mangte Akham Kom. Since childhood Mary Kom was interested in athletics. She took to sports in an effort to provide some financial support to her family as she was brought up in a poor tribal family in Kangathei, Manipur, India. She has struggled alot in her career. She has Inspired by Manipuri boxer Dingko Singh's gold at the 1998 Asian Games. Without any formal training and money, this ace boxer has won six gold medals at World Championships. In 2013, he received the Padma Bhushan Award.