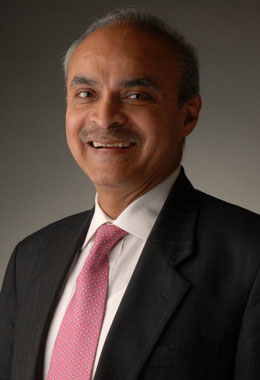 Manvinder Singh Banga is a senior partner at the private equity fund Clayton Dubilier & Rice. He was born on October 31, 1954 in Simla, to Jaswant and Harbhajan Singh Banga. His father was a General in the Indian Army. He graduated from the Indian Institute of Technology, Delhi in 1975 and did BTech degree in Mechanical Engineering. His colloquial name 'Vindi' comes from Vindhyachal Hostel in this institute. From Delhi he moved to Ahmedabad to study at the Indian Institute of Management (IIM-A), where he met his future wife, Kamini. Mr Banga is on the boards and managing committees of many trade and non-trade institutions, including Confederation Indian Industry (CII), Associated Chambers of Commerce & Industry of India (Assocham), Bombay Chamber of Commerce & Industry (BCCI), Indian School of Business, Hyderabad and Breach Candy Hospital. He is the recipient of various awards and honours, including the Jehangir Ghandy Award for Industrial and Social Peace from XLRI and the Distinguished Alumni Award from IIT, Delhi.

In February 2005, as part of a major reorganization of Unilever's upper management, Banga was elevated to the Unilever Executive, as the global head of the Foods division. In 2008, he was given additional responsibility for the Home and Personal Care Division, assuming the title of President, Foods and Home & Personal Care - effectively running all the categories across the globe. He is currently a Non-Executive Director on the Boards of Glaxo Smith Kline Plc, Thomson Reuters, Marks & Spencers PLC, and is on the Prime Minister of India's Council for Trade & Industry, and was awarded the Padma Bhushan one of India's highest civilian honours by the President of India in 2010.