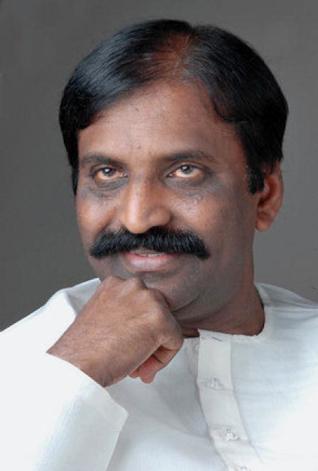 Vairamuthu is a Tamil poet and lyricist. He was born on July 13, 1953 in Vadugapatti, Theni, Tamil Nadu, India. Vairamuthu began his lyricist career through the Tamil film Soolam (1980) which was directed and produced by Oscar Movies M Baskar. Debuting in the film Nizhalgal (1980) with the lyrics for the song "Idhu oru Ponmalai Pozhudhu", he now has about 5800 songs to his credit as of January 2009. His partnership with Academy Award Winning composer A. R. Rahman has resulted in critical praise, awards, and box office hits. Vairamuthu received Padmashri in 2003 and Padmabhushan in 2014. He has been awarded National Filmfare Award four times for the best lyrics. He has participated in many literary meetings and poetry festivals in India and abroad. He is a recipient of Kalaimamani Award and Tamil Nadu State Government award thrice for his contribution to Tamil literature.