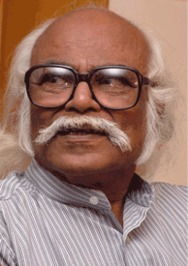 Jayakanthan was a Tamil writer, essayist, filmmaker, journalist, pamphleteer and critic. In 2002, he received Jnanpith award for his contributions to Tamil literature. He has also received Padma Bhushan in 2009. It was for the first time this recognition was given to Tamil literature. In 1996, he received Fellowship of Sahitya Akademi. He was awarded Sahitya Akademi award in 1972 for his work on Tamil novel Sila Nerangalil Sila Manithargal. Later it was made to a Tamil movie (1975) for which actress Lakshmi received National awards for best actress for her portrayal of the lead character Ganga. Jayakanthan has also received 'Order of Friendship' by Russia in the year 2011.

Jayakanthan was born in 1934 in Cuddalore, Tamil Nadu. He quit school after completing grade 3 education. Though he was close to his mother and grandmother, his relationship with his father was worse and he ran from the village at the age of 12 to Villupuram. He went to his uncle who introduced him to the world of literature by giving him the books, Subramanya Bharathy. He became associated with Communist party also by this time. Thus he became closely associated with the party office at Chennai and its associates. Many of his works later show great influence of communist principles. In 1949, nationwide restriction was made on Communist party and he was forced to work in a shoe shop in Thanjavur for a short period. His difference of opinion on many political issues forced him to gradually withdraw from CPI and active politics. His short story 'Karungali' show the traits of such personal conflicts with the party. He was fascinated with the former Chief Minister and Congress party leader Kamaraj and briefly served as a member of that party.